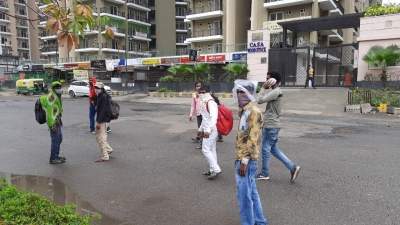 New Delhi (IANS) As grocery stores, across the country, are grappling with panic buying and dwindling supplies of fresh stocks, the exodus of labourers have added more fuel to the fire by affecting the entire supply chain of essential commodities, ranging from wheat flour to pulses and biscuits to edible oils.

Majority of grain markets are shut, oil and rice mills are operating with minimum workforce, and truck operators are finding it difficult to move fast moving consumer products (FMCG) across the cities, mostly sealed during the nationwide 21-day lockdown. If the situation aggravates, the country might witness hoarding of goods and price rise of several items.

Despite the efforts of Central as well as state governments to ensure proper supply of FMCG and other essential goods, the fear of COVID-19 pandemic is keeping away the labourers and workers from working in the mills and factories.

"The coronavirus fear has affected the production. Nearly 80 per cent of dal mills are inoperative due to unavailability of labour and supply of raw material. Though the government has now allowed plying of trucks, still issues with transportation remains," says Suresh Agarwal, of All India Dal Mills Association adding, "even as authorities have allowed truckers to operate, the police of different states, particularly on the borders creates hindrance in transporting goods."

Obviously in weeks to come, supply of different varieties of pulses, an essential part of the diet, could be crippled. "But if labour gets back to work, and transport issues are quickly sorted out, the supplies could be smoothen, thus maintaining a balance between supply and demand," hopes Suresh Agarwal. Some varieties of Arhar was quick to disappear from shelves of local grocery stores in Delhi.

"There was a panic buying on the eve of the lockdown on 25 March. I somehow managed to procure stock of Arhar and atta (flour) through a local trader. But things are getting difficult now," said owner of the Sanjay Stores in Vasant Kunj, a large residential area close to Delhi Airport.

Indian kitchens, particularly in the country's cow belt, cannot be run without atta (wheat flour) required to make roti (bread). Atta, comes through hundreds of flour mills located in the National Capital Region (NCR) of Delhi and its neighbouring states of Haryana and Uttar Pradesh.

"My flour mill is open. I had managed a few labourers too. But the problem is I am not able to procure wheat as nearby grain markets are shut," Rajat Gupta a flour Mill owner told IANS.

According to him, once the flour mills starts getting adequate supply of wheat from the traders, the mills will work to its optimum capacity. Subsequently due to a shortfall in supply, prices of Atta have increased. Bhanu, a grocery shop owner of Greater Noida said that he used to sell a 5 kg packet of Ashirwad Atta at Rs 180 but now it is available at Rs 220.

In fact the entire operation of grain markets, flour mills, rice mills including production and supply of FMCG remained affected due to transport and labour issues said millers, distributors and industry bodies.

Om Prakash Garg, a prominent FMCG distributor of Delhi said that since past week, he has been facing problems in transporting goods to wholesalers and retailers.

"Stocks of biscuits, chocolates, milk powder and other items are available at depots but due to disruption in transportation, supply of these food items and dry fruits have been affected," said Garg.

Another distributor, Rajesh Gupta, dealing in spices in dry fruits was of the view that fresh stock of spices is not reaching him from production units. According to him, a famous brand of biscuits, manufactured in Delhi by prestigious company is reportedly running its their factory at its half strength, thus creating a shortage in supply of biscuits and rusks.

However, Industry bodies expect after intervention of the Centre, restoration of supply chain of the essential goods would be seen resulting in a delivery of FMCG and other essential items to the retailers.

However, he accepted that prices of mustard oil have edged up amid supply disruption of food products but ruled out any expectation of further spikes in mustard oil as arrival season of new crop is going on and farmers are directly selling their crops to the expeller,

Similarly Jitu Bheda, Chairman, India Pulses and Grains Association (IPGA) also expect restoration in supply chain of food items soon. He said, "In fact, labourers are back to their home which is a major hurdle in restoration of supply and things will improve in the next 5-6 days."

Previous ArticleIs coronavirus less virulent in India? Too early to say
Next Article Jamaat campaign against India led to US hearings, resolutions on Kashmir
Must Read