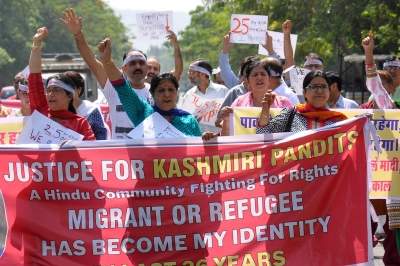 New Delhi (IANS) An organization of displaced Kashmiri Pandits has said that this financial year's budget of the union territory of Jammu and Kashmir has betrayed the community by not having allocated anything for their return and rehabilitation in the Valley.

Chairman of Reconciliation, Return & Rehabilitation of Kashmiri Migrants, Satish Mahaldar has said the budget for 2020 for Jammu and Kashmir, which is to cross Rs 1 lakh crore mark for the first time, does not have any allocations for rehabilitation, relief and welfare of displaced Kashmiri Pandits.

"Almost six years have passed since the Modi-led government came to power, but no proposal has been made for the return and rehabilitation of Kashmiri Pandits. Volunteered 419 Kashmiri Pandit families had been promised land and house in Kashmir, but nothing has been done so far," Mahaldar said.

The organization has demanded 600 kanals of land reserved for displaced Kashmiri Pandits who want to set up industry in Kashmir at nominal cost and 200-roomed old age homes in Kashmir for senior citizens of the community.

In the budget, during the current financial year, Rs 1,705 crore has been disbursed through Direct Benefit Transfer (DBT) to 45 lakh beneficiaries. 60,000 new pension cases are to be covered through DBT. "But, till date not a single Kashmiri Pandit has got any benefit under this Scheme," Mahaldar said.

The budget has proposed to generate 350 lakh days of wage employment under MGNREGA. "But, under this scheme not a single Kashmiri Pandit has benefited till date. Why have Kashmiri Pandits not been included in such schemes?" Mahaldar asked.

The organization has demanded a share of jobs for Kashmiri Pandits in the government scheme which aims to generate 45,000 self-employment jobs in dairy, poultry, sheep husbandry and fisheries sectors.

"No attempts had been made to uplift refugees from the state they have been deliberately pushed into. In fact, it seems that attempts are being deliberately made to keep the Kashmiri refugees away from such benefits, Mahaldar alleged.

In Kashmir, there are more than 1,387 temples and heritage which are more than 3,000 years old. "But, there is no mention of any temple being restored under the budget," the organization has noted.

Other demands include 50 per cent reservation for Kashmiri Pandit students in sports, one exclusive building along with amphi-theatre for art, culture and literature.

"Our beleaguered community, which is the first victim of terrorism in Kashmir and has been suffering for the past 30 years," Mahaldar said that Pandits hope the government will help them. "But the J&K budget 2020 has betrayed us," he said.