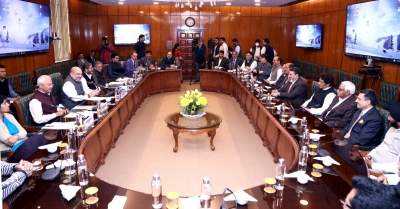 New Delhi (IANS) Union Home Minister Amit Shah on Sunday announced that the government will formulate a domicile policy for Jammu & Kashmir, a demand many have made since the revocation of its special status last year.

He gave this assurance to a 24-member delegation of the newly formed Apni Party led by Altaf Bukhari in New Delhi.

The Home Minister assured the delegation that Jammu and Kashmir will have a better domicile policy than other states in the country and a reasonable economic development policy will be drafted soon after widespread consultation, official sources told IANS.

The government, Shah said, will not discriminate in the implementation of Central laws in J&K.

Sources said Shah discussed around 40 different issues raised by the delegation and reassured them that the government had no intention to change the demographics in the region. "All such talks have no basis at all," Shah told the group of Kashmiri politicians.

Sources said the Home Minister also revealed that an industrial policy for rapid economic development will soon be announced. A land bank has already been created, he told the delegation, adding he was hoping that J&K will draw three times more investment than what the state drew in the last seven decades.

"In the last 70 years, J&K received around Rs 13,000 crore investment. That will solve the problem of unemployment in the region," he said.

Shah also said that a commission for reservations for nomadic and tribal communities will be set up soon in J&K. The Home Minister assured the delegation that he will direct the Lieutenant Governor of J&K to appoint a nodal person to meet the aggrieved people twice a week.

Reiterating Prime Minister Modi's statement that the government will work with all sections of the society to realize the hopes of statehood for Jammu and Kashmir at an early opportunity. He recalled that Prime Minister had made the commitment in his address to the nation after abrogation of Article 370 and he, himself repeated it in the Lok Sabha on August 6, last year.

Referring to freeing the detainees from preventive detention, restoration of internet, relaxation in curfew, Shah said: "Even political prisoners will be freed in times to come as the main objective of the government is that not a single person should die, be it a common Kashmiri or security personnel."

On J&K Bank, Shah assured the delegation that he would personally look into the problems and that the issues on the bureaucratic front and loopholes in general administration will be resolved on a fast-track basis.

Shah said he will also ask the LG to appoint a nodal person to meet the people twice a week. He also asked the delegation to provide feedback on the problems and their redress and said that his government is open to suggestions.

After the meeting Altaf Bukhari said his party came here with a message from people of Jammu and Kashmir to the Prime Minister and the Home Minister. "We did share our difficulties and apprehensions," he said.

The outfit, including political leaders from a wide spectrum, but all considered traditionally close to New Delhi, was launched on March 8.