Karnataka Bank allays fear and panic about safety of deposits 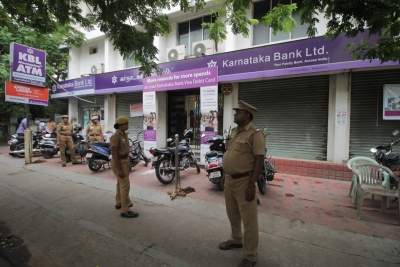 Mangaluru (IANS) The Karnataka Bank has reached out to its shareholders to allay any fear and panic about the safety of deposits and health of the Bank, and not to be carried away by any misleading and concocted reports on India Today channel about the safety of the Bank published and circulated with malicious intent.

In a communication to shareholders following media report of a M-cap to deposit ratio, Mahabaleshwara M. S., Managing Director and CEO said the bank is committed to continue efforts to strengthen the fundamentals of the bank and also to create value enhancement for all stakeholders.

"We remain committed in further strengthening the CRAR of the Bank by augmenting the capital through Qualified Institutions Placement (QIP)for which we are thankful to our shareholders for their approval", the MD said.

Following the moratorium imposed on the Yes Bank by Reserve Bank of India on March 5, a report by a television channel India Today, was telecasted on safety of some banks including Karnataka Bank, "using an absurd and flawed so called M-Cap to deposit ratio".

Later this report was also circulated widely in social media. "The above report by TV Channel India Today infused a lot of anxiety and panicky situation among the depositors in particular and other stakeholders in general and also raised a doubt about the safety of the Bank", the bank said.

"The aforesaid report by television channel is totally incorrect, mischievous and likely to mislead the public and depositors by creating shadow of doubt about safety of the Bank", the statement said.

"With a view to allay any fear and panic about the safety of deposits and health of the Bank, we have issued press releases dated March 11, 2020 and also clarified the same in social media. The Bank has also taken appropriate legal action against such incorrect and misleading publications", Karnataka Bank has said.

The bank said that the very next day of telecast of media report, Krishnamurthy Subramanian, Chief Economic Advisor to Government of India, Governor, RBI, Chairman of SBI (who is also the Chairman of Indian Banks Association) and other experts in the matter clarified that so called M-cap to deposits ratio is non-existent in the financial world and nowhere used in the world to measure the health of banks. In fact, the solvency and strength of banks is measured globally by referring to Capital to Risk Weighted Assets ratio i.e. CRAR only.

"The CRAR of the Bank as per audited financials as on March 31,2019 was at 13.17 per cent which is well above the CRAR of 10.825 per cent prescribed by Reserve Bank of India. It is amply clear that your Bank is well capitalised indicating solvency of the Bank and with sound financial position measured among other parameters like Net NPA (2.95 per cent) and Provision Coverage Ratio (PCR) (58.45 per cent) as on March 31, 2019.

"We, hereby confirm and reassure our depositors, shareholders and other stakeholders that your Bank is professionally managed and has a proven track record of consistent profit. The lending philosophy is largely assets based financing with adequate security cover. We are a financially sound and well capitalised Bank marching towards celebrating our centenary year in 2024", Karnataka Bank said.