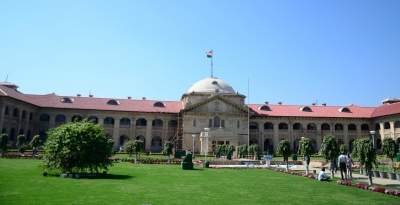 Prayagraj (IANS) The Allahabad High Court, on Monday, ordered the district magistrate of Lucknow and police commissioner to remove the name-and-shame hoardings with immediate effect.

The court asked the two officials to submit its report on the matter by March 16 which is the next date of hearing.

The court observed that the district administration had no right to put up photographs since this was a violation of one's privacy.

The bench, headed by Chief Justice Govind Mathur, had taken suo motu cognizance of the 100 odd hoardings that were put up on road crossings on Friday and the court heard the case on Sunday even though it was a holiday.

The verdict, reserved on Sunday, was delivered on Monday.

Government sources said that the state government would challenge the High Court verdict in the Supreme Court since chief minister Yogi Adityanath firmly believed that the name-and-shame hoardings would work as a major deterrent for those who damage public property.

The court has also asked the district magistrate and divisional police commissioner to explain the law under which the hoardings have been put up in Lucknow.

The hoardings carried photographs of anti-CAA protesters along with their names, photographs and residential addresses.

The accused alleged that the hoardings would make them vulnerable to mob attacks.

The accused have also been asked to pay for the damages to public and private property within a stipulated time, or have their properties attached by the district administration.

The move has attracted strong reactions from protesters, political parties, ordinary citizens, legal experts and social activists, who slammed the idea of public shaming in this manner.

In one particular photograph put up on the hoardings, a minor is also seen. The family of the minor said that they are also preparing to seek legal redressal in the matter.

"The hoarding has been put up by the 'orders of the district magistrate and police commissioner' and they owe an explanation to us," said a family member.