Coronavirus Effect: Message on mobile for prevention against Conronavirus 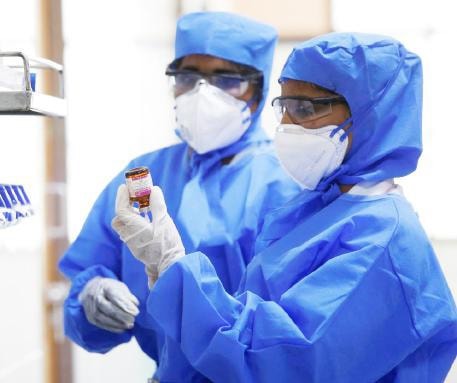 Ranchi: With every day increasing number of deaths due to Coronavirus across the world the people in the state capital are also under scare and are adopting to all possible means to protect themselves and their families
from the disease.

People are not shying away from shaking hands and are opting to wear a mask even they have to come out from the house for small jobs and special care is being taken for the children. People are also avoiding contact with patients who are suffering from cold and cough while many of them have also given up eating non-veg food.

To stop the spread of Coronavirus the state government was also on an alert mode and messages on mobile are also being related regarding the preventive steps to be taken against the disease and when one makes a call on another mobile number one can hear the message in which people are being asked to get in touch with the doctors in case of cough and cold. The Health Department has said that Coronavirus is not related with consumption of non-vegetarian food.

Jharkhand Chief Secretary DK Tiwari said that the state is completely safe from Coronavirus and even in the neighbouring states no positive case has been found. He said that insufficient numbers N-95 masks are available in RIMS and there was no need to press the panic for masks. He said that only those needed to wear the masks who are suffering from the disease or have symptoms for the same.

He said that better from wearing the mask is important for the people to avoid crowded places so that infection does not spread and asked the people to wash their hands regularly. The Chief Secretary said that all preparations have been made in the RIMS to fight against the disease. In the Hospital an 18 bed isolation ward has been set up at the third floor.

On the instructions of the Chief Secretary it has been directed to organise mock drills at the hospital so that the nurses and doctors remain prepared to tackle if any person comes infected with the disease. The state government on it’s part has asked the people to remain away from public programmes and said that after the impact of the virus reduces it would be appropriate to organise the function.

It has been directed that organising such an event becomes priority than the guidelines issued by the department needed to be followed. Principal Secretary of the Health Department Nitin Madan Kulkarni has directed all the DCs to send reports related to the programmes being conducted for checking the spread of Coronavirus on a priority basis.

The health department has asked the people not to fall prey for rumours being spread overeating of particular food for the spread of the disease. The department said that reports in social media that disease was spreading through consumption of poultry, egg and fish was wrong therefore people should eat them and even the WHO guidelines have claimed the same.

He said that in a total 8 samples were sent out from the state to Pune and Kolkata for tests and all the reports have turned negative.