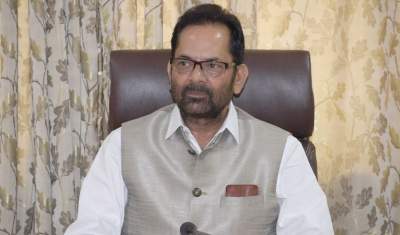 New Delhi (IANS) Union Minority Affairs Minister Mukhtar Abbas Naqvi on Saturday created a political storm by saying that the "secular ride" on the recent "communal riots" in the national capital must be stopped. Taking a sharp dig at the opposition, he used the term "professional provokers".

Talking to reporters in New Delhi, Naqvi said that instead of healing the wounds of the victims, few political outfits and "professional provokers" are rubbing salt into their wounds. He added, "Provokers and perpetrators will be in prison, and peace and harmony will prevail".

Naqvi said, "It is our collective responsibility to ensure the victims get justice and perpetrators are punished heavily and peace and harmony is restored.

"When we heard reports of violence and anarchy, at the same time we have witnessed several examples of harmony and brotherhood. This is the strength of unity in diversity of my India."

Talking about the soul of secular and democratic India, he said everyone should ensure against allowing efforts to weaken that soul and strength of India, under any circumstances.

He added that any kind of violence not only inflicts injuries to a human, but also the entire humanity and it also hurts the soul of India. "It is the national duty of all of us to ensure that the fabric of harmony and unity doesn't get weakened under any circumstances," he said.

While the Minister made all the right noises, his dig at whom he calls "professional provokers" did not go unnoticed. With the Parliament session starting next Monday, Naqvi's statement has set the tone of what to expect from what may be one of the most fiery sessions.

His statements came in the backdrop of the deadly Delhi clashes that ended up in the death of at least 41 people, including a Delhi Police personnel on duty and an IB staffer who is said to have been stabbed 400 times.